Fashion. We all know that with fashion we mix and match a variety of clothing items to create an outfit that would suit our likes, body types, and what is in season. We have the tops with a variety of shirts in the selection, we also have the bottoms with a variety of pants, shorts, or skirts to choose from, we have accessories or bags to complement the outfit, and we also have our footwear which varies from sandals, flip flops, shoes, boots, to heels.

Fashion is a way for us to creatively express ourselves and there is always a meaning behind why we wear a clothing article. We dress on what we are feeling or based on our occasion which is why we get so meticulous about what we should wear to match the theme and to respect the purpose of the occasion.

We also dress based on the trends we see on the internet or in magazines to show off our spin on a trendy outfit. We try to find or make some articles of clothing to keep up with trends. For other reasons, we dress up to be functional. Now, what does that mean?

For example, architects and engineers wear safety helmets to protect themselves when they are at work which is sometimes at a construction site. Another example is for medical professionals, usually wear scrubs or specific shoes so that it would not be so hard for them to move around in the workplace since hospitals are known to be one of the busiest workplaces due to some emergencies.

But of course, the functionality of fashion does not have to be limited to the workplace aspect, functionality is also widely used in our daily life. A great example of this is the wearing of rain boots during the rainy season. If you are outdoors, expect that there are some puddles or floods when it rains and if you wear boots, you will be protected from the puddles. Of course, along with the functionality, it can also be related to the comfortability of the wearer as well.

A perfect example of this is the wingtip shoe and you will learn more about this kind of shoe with the help of this article. 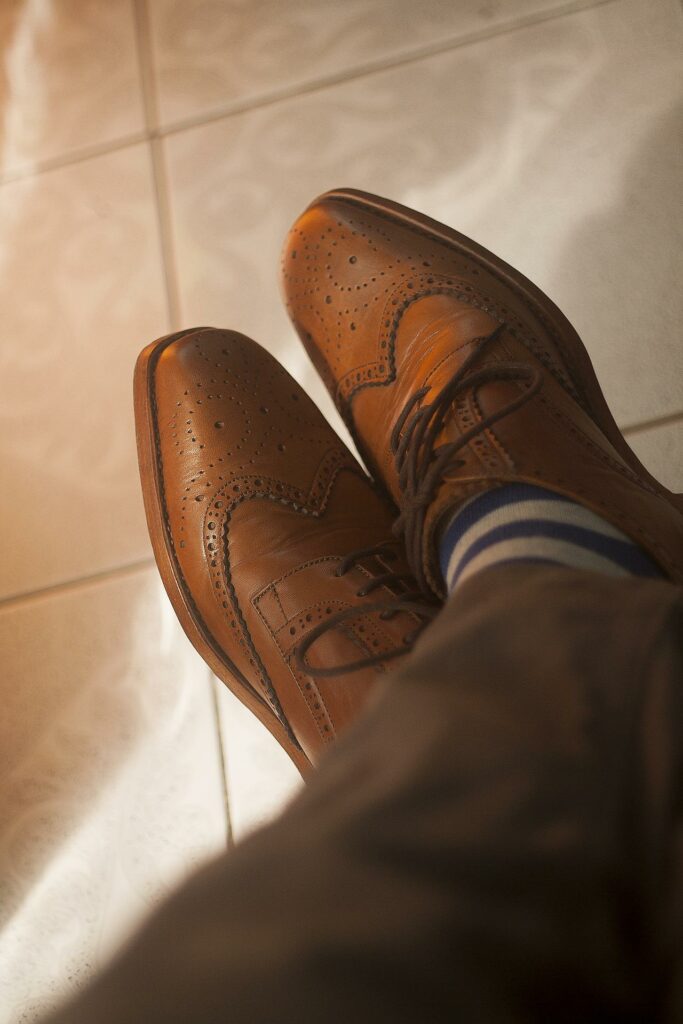 What is a Wing Tip on a Shoe?

Wingtip shoes have a leather overlay shaped like a “W” or shaped like a wing on the toe part of the shoe thus. This shoe is a classic amongst men and has been one of the popular footwear for so many years.

Originated from the Gaelic word around the 16th to 17th century, “Brogue” and Old Norse term, “brog”, with these terms defined as “leg covering”. Its name was not really “wingtip” but “brogues”. The older versions of these shoes were primarily used for rainy days or wet environments because the holes help with draining the water from inside the shoes. The holes also make a good ventilation system for the wearer to avoid any moisture build-up.

These shoes were commonly worn in the countryside until the city folk started to catch up thus turning wingtip shoes a trend. However, in their case, city folk used brogueing as more of an aesthetic instead of using the shoes for their functionality. From being a strictly work-only shoe, it became one of the fashion trends back in the day.

Brogues were worn by The Prince of Wales for golf trips back in the 1900s and with his influence, brogues have established their position as one of the must-have footwear for men. Not only that they were worn for formal, work, and other occasions, but Elvis Presley, a famous musician also included brogues in his style. 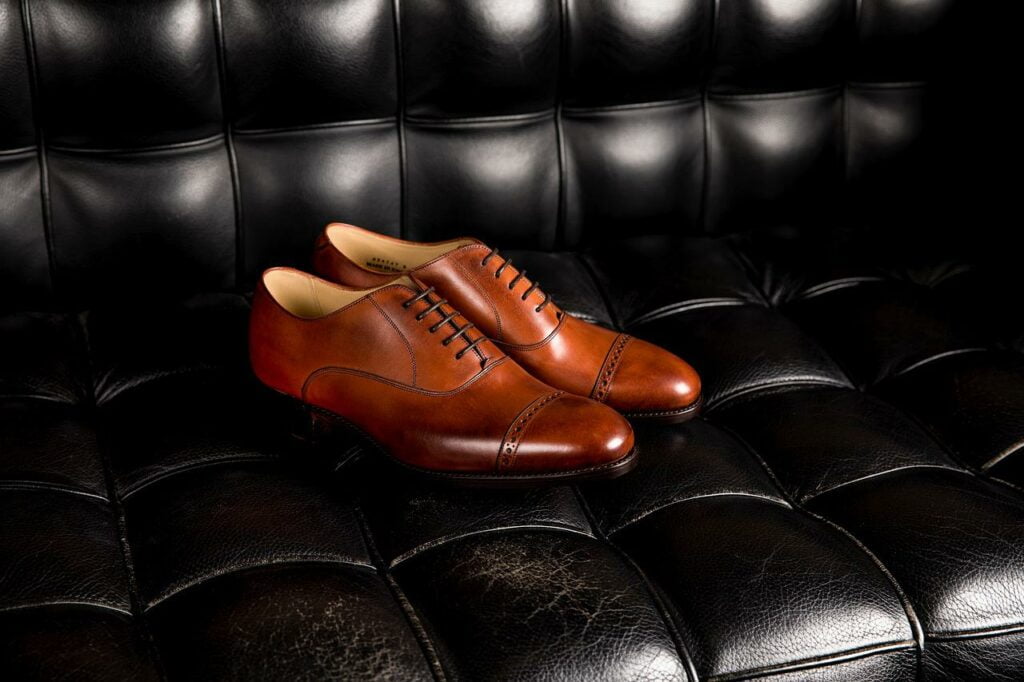 Why are they called wingtip shoes?

The reason why these types of shoes are referred to as wingtip shoes is due to the W-shaped overlay on the toe part of the shoe. This W shape leather overlay also looks like a wing thus being called, “wingtip” shoes.

The concept of shaping the toe part of the shoe into a W is still in question but it is assumed that the purpose of the overlay is meant to be a protective cap for the toe part and it is then stylized or evolved into different aesthetics to match the trends.

What’s the difference between wingtips and brogues?

It can get confusing with how this type of shoe is called since some people would synonymously call a wingtip shoe, a brogue shoe.

To avoid any confusion, wingtip shoes, if referred to as “brogues” are not accurate in technical terms since “brogueing” is defined as the details of the shoes – either on just the toe part of the shoe or the around the shoe. Remember that a brogue shoe does not always have a wing shape on the tip or the toes.

In addition to this, wingtip shoes do not always possess a perforated detailing and this would be referred to as the “austerity brogue.” But since we do not usually get technical with fashion, we just use a term to not confuse ourselves. So if you see a shoe without the brogueing, we just refer to it as a “wingtip shoe.”

Just simply call a shoe with a W shape or wing shape on its toe part a wingtip shoe.

What is the difference between Oxford and Wingtip shoes?

Now that the debate between brogues and wingtips is settled, there is also another question regarding wingtips when compared to Oxford shoes this time and this segment will help you with differentiating the two shoes.

What Are Oxford Shoes?

Since we already have previously defined what wingtip shoes are, let us dissect what an Oxford shoe is.

Oxford shoes are known for their lacing system in which some people even use the term Oxford to refer to a smartly laced-up shoe but that is not the case. Oxford shoes possess laces and it is not just a typical slip-on shoe. And regarding its lacing system, it has a closed lacing system. Still confused? Let us begin with the basics.

The uppers of an Oxford consist of the vamp and the quarters and these are the definitions of these parts.

This part of the uppers of an Oxford shoe is the one that wraps around the heel part and will meet the vamp in the middle of the shoe. This is like the back of the shoe.

Now that you have known the basics of the Oxford shoe, it is time to tell the difference between it and the wingtip shoes.

It is already quite obvious that one of the main differences between an Oxford shoe and a wingtip is the toe part or the tip. The wingtip has its signature W-shaped or wing-shaped tip on the toe part. The wingtip shoes also have their brogueing or the detailing as well as their holes. Its tip is also a bit rounded.

As for the Oxford shoes, its tip or the overlay is not in a shape of a W or wing but it is only a simple shape. Its tips are also rounded but sharper than the wingtip shoes. Another noticeable difference between the two shoes is that an Oxford shoe does not have any holes or other intricate designs on the tip.

The only similarity that the two shoes possess is that both of them are closely laced.

Can you wear wingtip boots with a suit?

It is of note that wingtips are no longer just used for day-to-day casual shoes when walking in wet environments but it has also progressed into a shoe meant for dressing up or as a shoe meant for other purposes.

Wingtip shoes are very multipurpose or versatile and can be worn in many different styles. One of the most common ways to wear wingtip shoes is by wearing a suit. It could be a workplace suit, for like being in an interview, as an employee, or employer. It could be paired with school uniforms as well. For male students who wear school uniforms, which consist of a blazer, tie, dress shirt, and trousers, well wingtips can be a match to their uniform since wingtips or brogues can complement the outfit and it does not overwhelm it. 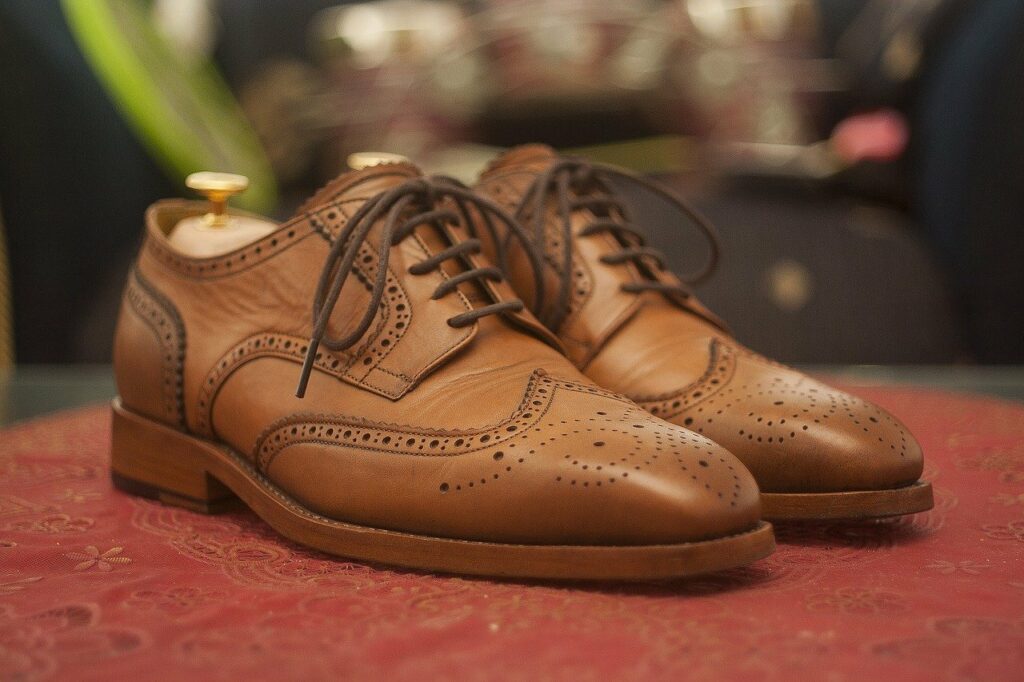 Since wingtips are no longer just used for casual wear when walking around wet environments, it has become one of the must-have shoes for men in their wardrobe because they can be worn on different occasions.

As time progressed, wingtips were starting to be made into more multipurpose footwear because they not only can be used for casual wear but can also be used for formal wear.

One can even just own one pair as long as it goes well in any suit or outfit that you create, this is what makes wingtips an essential part of a man’s closet. But hey, if you want to collect more of these shoes, then you do you!

Can Wingtips Be Worn with Jeans?

Since it has been established that wingtips are versatile and can be worn as formal wear, another question comes to mind and that is if wingtips can be worn with jeans? Yes, of course!

Fashion is not limiting and you can do whatever you want with your outfit because confidence in wearing it, comes to play. If you are confident with wearing something you think is controversial or unusual, you will feel good and look good.

Wingtips and combining them with jeans make up for a great semi-formal look if that is what you are going for. With the sleekness of the brogue and the gruffiness of the jeans, they are contrasting yet complement each other.

You can pull this off with slim-fitting jeans, the appropriate or stylish top, and complement it with your wingtip shoes then you are good to go!

Who makes the best wingtip shoes?