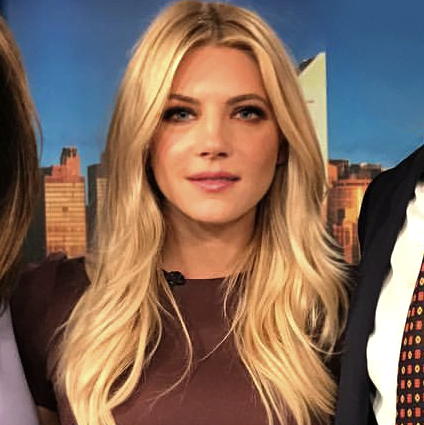 Katheryn Winnick is an actress who was born on the 17th of December, 1977, in Ontario, Canada. Her birth name is Katerina Anna Vinnitskaya and was born to Roman Winnick and Lesya Winnick. She is popular for having lead roles in the popular, Emmy’s prize-winning television series called Vikings, which ran from 2013 to 2020, Wu Assassins in 2019, and the ongoing Big Sky from 2020.

The Canadian actress also had a regular role in Bones that ran for a year starting in 2010. As you can see, Winnick is quite a popular face on our screens. She also features in the Call of Duty hit video game, making her popularity known to an extensive group of people. Surprisingly, Katheryn has a 3rd-degree Taekwondo black belt with a second-degree Karate black belt.

At just seven years of age, Winnick enrolled in martial arts to train, and at 13, she attained her first-ever black belt. The actress sought to share her skills and so, she started three schools, teaching Taekwondo while she was 21 years old. Among the schools was Win Kai Martial Arts. There, she taught actors both Taekwondo and self-defense skills in conjunction with finishing her Kinesiology degree at York University in Toronto.

Katheryn first got her acting performance in the 2001 American Horror film called Biohazardous. Here, Katheryn played the character, Jennifer. After graduating from York University, she relocated to New York in pursuit of acting at William Esper Studio. From New York, she went to pursue her career as a professional actress in Los Angeles, California.

Born in a small town called Etobicoke in Ontario, Canada, Katheryn Winnick was brought up alongside her siblings. She has three siblings of which one is a sister. Daria Winnick is the actress’ sister whereas Adam and Markjan Winnick are her brothers. Markjan is an actor who is also popular for his appearance in the television series, Vikings in 2013. He also took part in the 2019 Wu Assassins and 2018 Isabelle. He is Katheryn’s older brother.

Adam is the Canadian actress’ younger brother who shares a plethora of skills in different fields. He also appeared in an episode in Vikings, What happens in the Cave. However, it was just an appearance and his character wasn’t named. Though the siblings dressed the part with unique haircuts and rocking beards.

Before she was an actress, Katheryn was a licensed bodyguard, thanks to her experience with martial arts- Hey, we all got to put something on the table. As mentioned earlier, the actress had opened up three schools where she trained various actors in martial arts for film sets.

It was 1999 when many directors and producers caught a glimpse of the young lady and were given a supporting role in the Faktor PSI TV series episode. Her good looks and charm influenced this role a great deal. Little did she know that she was made for the screens! Katheryn was again selected to play the role of Holly Benson in Student Bodies, a TV series that ran between 1999 and 2000.

In 2000, after the television series, Winnick appeared in the horror movie, Biohazardous in which she played the character of Jennifer. This further sparked her interest in acting as she had developed a keen interest to showcase her talents.

In 2002 after making appearances in the films mentioned above, Katheryn had a breakthrough for playing Marcia in the Smoking Herb film. She also took up a lead role in Ari Kirschenbaum’s television film called Fabled where she was given the character of Liz. The 43-year-old also starred alongside Hugh Grant and Sandra Bullock in TwoWeeks Notice film.

In the following months, Katheryn appeared in various television series as a guest star. The series included 10-8: Officers On Duty, Wild Card, and OZ which aired in 2003. In 2004, the December-born actress took the role of Jenna Whooly in the film called Satan’s Little Helper.

The subsequent years saw her engage in other activities and later, after two years, in 2006, she was given a major role as Melissa in the Failure To Launch film. In this film, she starred along with Sarah Jessica Parker as well as Matthew McConaughey. Still, in 2006, the Canadian actress appeared as a guest star in several TV series including; the 2004 CS1 Miami, 2006 Criminal Minds, and 2008 Law & Order, among others. Here, she contemporarily took up all these roles and worked extra to commit to all.

As the decade came close to ending, the Canadian actress had participated and starred in so many films. For starters, she was a cast member of When Nietzsche Wept as Lou Salome which aired in 2007. She portrayed the role of Tabitha in 2008’s Amusement film and landed the Sveta character in the Cold Souls film in 2009.

Still, in 2009, Winnick was invited to play in the TV series, Bones, portraying the character of Hannah Burley. The TV series only ran for one season. As the hard-working woman, she had become, Katheryn did not slow down. She made an appearance in the Night And Day film that ran in 2010 where she played the role of July. This saw to it that her net worth increased steadily.

The then 32-year-old, in 2011 took up her first major role in the Choose film where she portrayed the character of Fiona Wagner. Soon after, Katheryn was lucky to play Ivan in the A Glimpse Inside The Mind Of Charles Swan III film in 2012. She is also featured in the short Children Of The Air film as Samantha. Roman Coppola directed the short film in 2012. In 2013, she played Lola in The Art Of The Steal film.

2013 was the year Katheryn garnered massive recognition and her popularity shot to the roof with her Vikings character Lagertha. Here, she took up the role as the wife of the prominent Viking Ragnar Lodbrok who is among the important Viking history figures in the television series. The series started in 2013 and is currently ongoing and is brought on the History Channel.

Still, in her acting career, Katheryn appeared as a guest star in the Person of Interest TV series episode, portraying the role of Frankie Wells in 2015. She was in 2017 The Dark Tower film, playing the character of Laurie and voiced over in the Call of Duty: WWII video game the same year.

In recent times, Winnick began filming Wu Assassins, a Netflix television series as Christine Gavin. Among the genres of the television show are martial arts, which the actress learned and is still passionate about. In the2019 Polar action thriller film, Katheryn Winnick played the role of Vivian. And in 2020, she took up the role of Jenny Hoyt in the Big Sky crime television series that is on the second season.

Katheryn Winnick has flourished in her career as an actress. This has seen her achieve plenty of significant awards and nominations for the roles she takes in films and TV series. In 2012, the then 35-year old Katheryn took the Best Actress lead in Beverly Hills Film Festival for appearing in the Children Of The Air film.

Katheryn Winnick began her career in the early months of 1999. She went ahead to further her studies and became a professional actress. Since then, the 43-year old Canadian actress has accumulated a net worth of over $1 million as both an actress and a teacher (martial arts). She is still an active member in the field of entertainment, so, her net worth will steadily surpass the ostensible current one.

Most actors and actresses enjoy leading a private life away from the on-screen life. However, as their fans, many people would like to know what happens to their stars once they are off-set. Winnick is one of these celebrities who preferred to keep their love life private. Being the most loved for her Lagertha role in Vikings, she displays a lot of chemistry with her on-air husband Ragnar. However, the two are not dating off-screen.

The Vikings’ starlet has been portraying a private love life until recently when she posted a sneak pic that offered great insights into her personal life. About a year ago on Instagram, Katheryn posted an intimate photograph of her posing with her boyfriend Michael Persall. Michael is a businessman who had earlier been rumored to have been in a relationship with the star.

However, when Winnick uploaded the pick with a love heart caption, all the rumors were proven to be true. Not long after, her Vikings’ co-stars (Ragga Ragnars, Kirsty Dawn Dinsmore, and Clive Standen) expressed their happiness and love towards the couple. So, up to date, it is confirmed that the Canadian actress is in a relationship with the businessman Michael Persall.

As private as the love life of this Vikings’ starlet is, we only go by mere hearsay. Sometime in 2015, Katheryn was reported to be dating Nick Loeb- who was the Modern Family’s actress Sofia Vergara’s ex. Nick Loeb is an American businessman who had just parted ways with her then-girlfriend, Vergara after dating for four years. Sofia took to her Twitter about the news of their break up but said they were still quite close.

After that, Nick and Katheryn were linked to having a relationship. The two were seen attending the Golden Globes hand in hand. However, Winnick’s representative stated that the pair were just friends and nothing more. Only then did the paparazzi back off from the story.

Besides being an active media personality as an actress, Katheryn Winnick has time for all her social media platforms. She has an official Instagram account with a following of over 5.4 million and goes by the name katherynwinnick. Her Facebook page has over 1 million likes, with plenty of people talking about her.

She joined Twitter in 2009, where she has garnered a following of over 495k members and now has an official account called @KatherynWinnick. What is more, she has her website launched. She shares more of her information on future projects on the website.

Katheryn Winnick is quite an attractive woman standing at a 5’6” height and weighs about 121 pounds, which is 55 kilograms. Her blonde hair and blue eyes make her stand out from the crowd.